8 am again, with a shower, a breakfast and some Eastenders. Another episode completed! The shopping arrived as I was finishing my packing. I got the frozen stuff in the freezer – just and the cool stuff in the fridge still in the carrier bag – sorry Alice!
I was ready by 9:30 and even had a cuddle with Ash before I left. The bus transfer was on time and we made it to the airport in good time even though we went round the houses on the way. There are so many places not far from Byron Bay but you can’t see them from the road and it was nice to get to have a look.

At the airport check-in was easy. Security was not problem. I had a cheese and tomato toasted with a cup of tea while I waiting for the boarding time. Boarding was delayed until 12.00 but the flight took off only five minutes late. There were a lot of children on the flight but I put my head phone in and listened to my audio book and wrote some of up the blog.

We arrived early, I didn’t have long to wait for my bag and I made my way to the Info desk to organise the city shuttle. The lady at the desk was really helpful and she also sold me a buy one get one free tour package so I now have something to do on Saturday and Monday. More about that later! The shuttle driver was a guy from Newcastle who had been here for years but still had the accent. He was a funny bloke and made us all laugh and explained a few of the sights on the way. 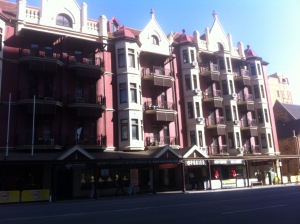 The Mansions on Pulteney is an old building which has been refurbished – not to the highest specification but serviceable and it has a lovely double bed. The tiles in the bathroom are original and look great! 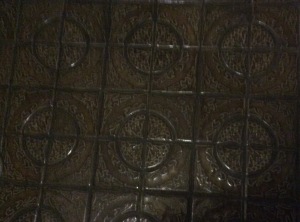 Once I had dumped my stuff and taken everything I didn’t need out of my handbag I headed out to find a supermarket. Fortunate, I am round the corner from Rundles Mall and had a lovely stroll down a pedestrianised street. I found an Apple Store and bought a device so I can get my photos off my waterproof camera. I then had to get an adapted from another store to convert my micro card to a macro card so it would fit! I also found a clothes shop and had to go in!😀

Then it was time for food shopping. While I was getting provisions for the next few days I passed the vitamin aisle and had an idea – I found some Glucosamine and Chondroitin supplements. I thought they might be helpful for my knee. I remember using them before and finding them useful. I must remember not to stop taking them!

I spent the rest of the evening watching tv, knitting and trying some really tasteless humus – it was awful and I had a ham sandwich instead!
Quote of the day

2 thoughts on “Byron Bay/Adelaide – 5th May”