Well, I know that Castell got safely on the plane eventually!  Thank you to all my friends for helping him to get there. I hope to speak to him from Kuala Lumpur when he gets there!

So this morning started with the knock at the door at 6:50 – Alice and Jon were off to the hospital and I had Elsie!  How exciting!  We had a snuggle in bed for a bit until she said she was hungry so then breakfast of cereal and raisins followed.  She ate the lot all by herself and had a few of my raspberries too.  A couple of Easter eggs we eaten too!

The weather was terrible with rain coming down hard so we started watching The Jungle Book  – a favourite of Castell’s when he was young.  She really enjoyed it so I took the opportunity of having a quick shower and getting dressed while she was engrossed.  It nearly worked!

At some point that morning the rain eased and we went to the park dodging the rain drops – Elsie did some swinging, slid on the slide and bounced on the tree!  I took kitchen towels so she didn’t get too wet or mucky although she did managed to cover me with dirty from her shoes when she was on her second swing!  She thought this was great fun! 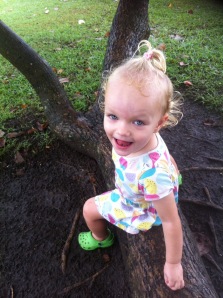 Lunch of cheese sandwiches and cucumber was eaten up along with a couple of eggs afterwards. Then it was time for a nap – all was well for 5 mins and then she was calling for me – I hadn’t taken her hair bobble out and she had hair on her dummy!  Once that was sorted out she slept like a baby for two hours giving me a bit of a break and a chance to do some knitting.

She woke up at 3:30 and remembered to call for me!  As soon as she was fully awake and had had a yoghurt we were off for ice cream – I was prepared with wet wipes!  We both had a strawberry cone and she loved it.  She didn’t get much ice cream on her but thoroughly enjoyed it at the same time!  I was impressed!

Back home we had a painting session – not with lots of different paints but with one of those books that only needs water!  She really enjoyed herself and I was the one who knocked the water over! Seven pictures were painted in all – unfortunately the paint didn’t come off our hands!

Elsie just wanted to know why Mummy and the baby were naked – we just got the photo on the right!  I said I thought it was because they had just had a bath.  I was very pleased she didn’t ask how the baby got out of Mummy’s tummy!!!  Congratulations Alice and Jon!

The Jungle Book was watched while I cooked supper of fish fingers, chips and peas – they went down a treat too also followed by a couple of Easter eggs!  Elsie finished watching the Jungle Book while I cleared up.  We found out that Daddy was coming home to put her to bed so we got the bedtime stuff ready and read lots of book until he got home!
I can honestly say we have had a lovely day and she has been an angel all day!  She was very glad to see her Dad though and after getting a birthing report from Jon and seeing some more photos I left them to their night time routine.

I spent the evening communicating with Castell who arrived in Kualar Lumpa safely and knew how he was getting the next flight.  I left him to it at about 11:30.  I will find out in the morning if he made it!

Couldn’t choose between these two – brought a tear to my eye!