When I woke up Elsie and Jon had gone swimming so I had my breakfast, showered and got dressed before they got back.  Alice and I caught up on Eastenders while we waited for them to come back.  Elsie and Jon had a shower when they got back and Alice hid some of the Easter Eggs.  When Elsie was out she came down to my room to collect her bunny ears and egg basket while Jon hid some more eggs in the lounge. 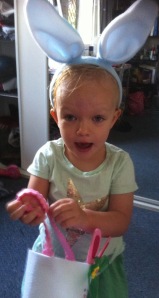 Then she was upstairs hunting!  She found 17 eggs and a Frozen Easter gift box all from the Easter Bunny! 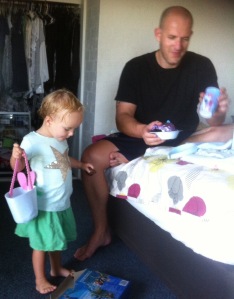 Of course she wanted to eat them all straight away! She had some and put the rest in the fridge for later!

We then all had hot cross buns – yummy!  During all this I was also in contact with Castell who had, by the time it was 10pm Friday night his time, packed everything and just had to get up in the morning and get to the train.

Once naps and studying were underway I went out to investigate the Easter Market.  It went on for quite a way with all sorts of stalls.  I would say about half of them were food stalls and the rest were clothes, things people had made like chopping boards, lots of organic stuff and not a lot of plastic! 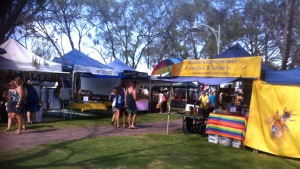 I did see a few things I liked but some were too expensive and others too big to put in a suitcase!  Once I had exhausted the market I went to book an appointment for another waxing and to pick up a few bits for the bolognase I was cooking for supper.  I found everything but the Worcester sauce.  It was a very hot afternoon so when I got home I had a nice icy pop and sat in front of the fan checking Facebook etc on my iPad.

One site I have come across which has some interesting articles is Standard Issue Magazine and I came across one that talked about women growing older and things that happen to them.  It was linked to a book and after reading some of the pages on Amazon I decided I wanted to read the whole book. 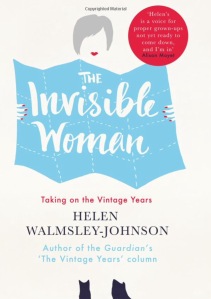 Anyone read it – or her column in the Guardian?

I found a bookshop in Byron that said they had it and I decided that perhaps I could afford something from the market and I nought of another place I could get Worchester sauce!  So I went out in the heat again!

The market stall didn’t have what I wanted but was making some more in the week.  Here is an idea of the stall… 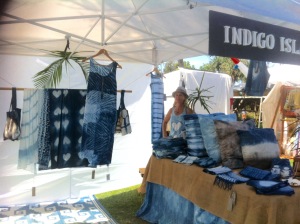 I particularly like the white hearts on a deep blue back ground – you can see the pattern in the back ground but that is a throw and too big for a scarf!  The owner dyes materials from muslin though to silk and has a lovely tones to the colours. 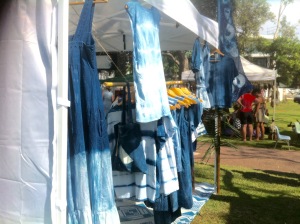 All beautiful stuff and I could have gone mad but at least a scarf will fit in my suitcase!

Then I went to the book shop – but they didn’t have a copy of the book and couldn’t order it for me!  Perhaps they need to bring themselves into date as they have lost my business! The Spar supermarket was next and it did have Worcester sauce!  I was gob smacked!  It did give the bolognase a bit of a kick!

I ordered the book on line as soon as I got back, unfortunately, it will take up to 10 days but I know I will enjoy it when I get it.  I know I could have ordered it on my kindle but I can’t read my kindle on the beach! And I need a beach book! 😀

The bolognase went down well – I just didn’t do a good enough job of taking out the onion for Elsie!  But she was so sweet and said “Auntie Stephie you are my best friend!”

The evening was spent speaking to Castell about what to do when on his travels and reminding him to dump any food he hadn’t eaten before he got off in Sydney etc.  He was calm and confident he had everything organised.  I stayed up until he told me he was on the right train…. 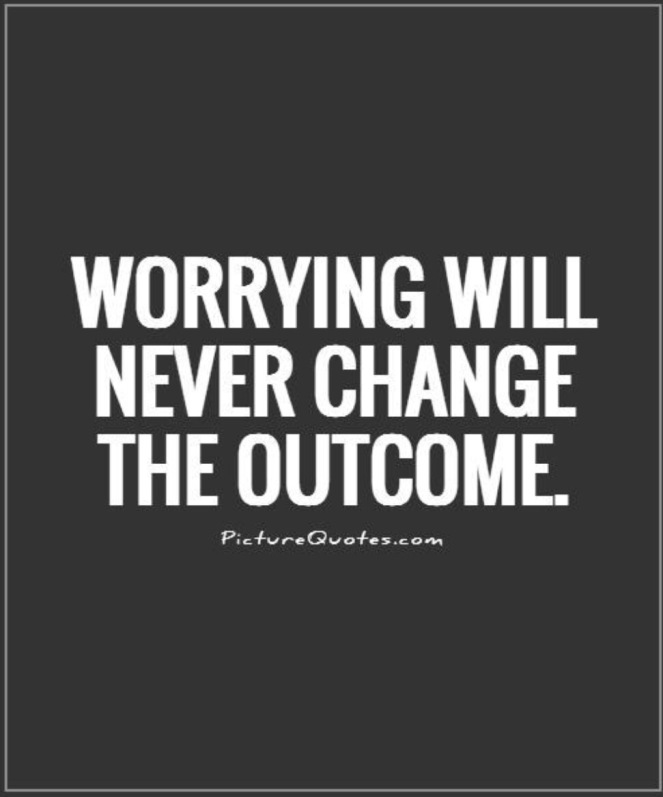