Well, we are all up early today.  Elsie for nursery, Jon and Alice off to hopefully the last doctor’s appointment and I am off to see what the Country Women’s Association is all about.

I arrived in Bangalow and found a parking space that was free.  I walked up the hill, crossed the road and stopped in front of the shop window.  What I could see inside brought a smile to my face and I knew that I would have a good morning.  I was met by a lady called Sybil who was the Vice President and I gave her the cookies I brought with me.  She asked if they were homemade – unfortunately they weren’t.  She asked me if I wanted a cup of tea and due to confusion I added English breakfast tea.  She must have thought I was a bit strange but she went off and came saying they didn’t have any but they had some Bushells!  I said whatever was in the pot would be great.  And it was – proper tea that I am used to made in a pot!  Bushells was just the brand name for ordinary tea!  Not the best way to start out!  Anyway, I sat at a table with Sybil, Madge, Barbara and Michelle.  They were all knitting something different  – Sybil was knitting a coat hanger cover using that lace yarn that Jean used a couple of years back and Michelle was knitting a scarf for the homeless.  They were all very kind people and very welcoming – all had a knitting story to tell and some told me something about themselves.  One reminded me of Grannie and another had met Jon!  As the morning went on I was introduced to more people and explained my knitting over and over!  I was very happy!

At lunch time most of them had brought their own lunch but I didn’t  think I would still be there so I popped out for a quick egg roll and chips! 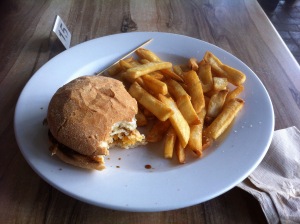 It was very quick and extremely delicious – one of the best egg rolls ever and good chips too!

When I got back I chatted some more, knitted some more and was invited to come along again the following day if I could to help with making of stuff they sell for charity.  They have all sorts of stuff in the window both sewn, knitted and crocheted and it was all beautiful.  They had this beautiful peg bag that I just had to buy ….. 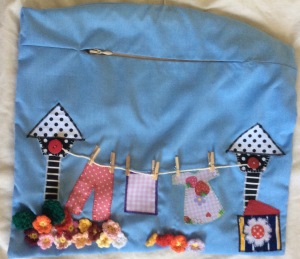 And I will need one when I get home!  I just hope I can fit everything in!

They kicked me out at 2pm when they were shutting up the shop and I could help smiling.  I really enjoyed myself and I am definitely going back there as soon as I can!

I had also found out about an op (charity) shop no far so feeling great I walked round the block and found it.  I spent the next 40 mins rummaging through pretty much everything thinking that I wasn’t going to find anything.  Then I found the children’s dressing up clothes and a fairy dress jumped out at me followed by some blue netting in an adult skirt – this gave me an idea!  Elsie loves Elsa from frozen and is often making her blanket into a train to swish about.  I thought I could use the blue netting to make Elsie a long train – the bits I bought came to $3 about £1:50.  Something else to do but it will make a change from knitting!

Elsie loved the dress when I got home and put it on immediately and was playing with her reflection in my mirror!

Jon made fish and chips for supper so because I had already had my chips I just had the fish and the vegetables!

I spent the evening catching up on some of my blog and talking to Castell on FaceTime trying to find out if he was organised!  I don’t think he has started packing yet! I am trying not to worry!

All in all I had a lovely day and really enjoyed meeting some of the local women and finding out about what they are doing.

Quote for the day:😀 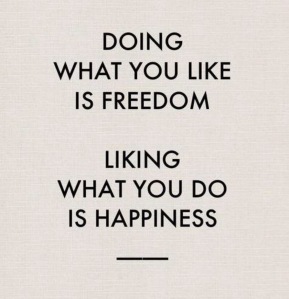