Another early start to take Alice up to see the doctor for her weekly check up. It had rained most of the night and was still raining when we left so I took it easy on the drive up. Whilst waiting at the doctors I started my fourth strip and managed to get a fair bit done.  All is fine with Mum and baby is doing what it should be at this point!  There was no need for any shopping as we have everything Alice needs so we drove back straight away, stopping off for a coffee, a cup of tea and cake at a service centre just off the highway.  It was really difficult to choose as they had Krispy Cream Donuts ….. 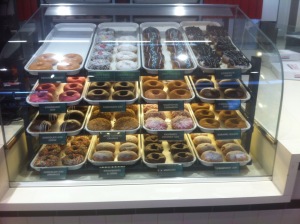 But in the end we chose these buns….

A lemon tart for Alice and a raspberry and white chocolate muffin for me – obviously they were delicious as we couldn’t wait to try some before I took the photograph!  I am really enjoying the time I am spending with Alice and getting to know her much better – we talk about all sorts of things her work, my work, her experience of living in Australia, our memories and what we want for our futures, the list goes on!

It was miserable weather on the way back too so I took it easy again.  When we got in we caught up on Eastenders and Who Do You Think You Are while we recovered from the trip. After lunch Alice went for a lie down and I went to my room for some blogging.  Once I had done the blog I put the radio on and finished sewing up the three strips. 👏👍😀

Much easier than trying to watch a film and sew! While I was listening to the radio there was a discussion about Prime numbers so I pricked up my ears to listen to what was being said.  Prime numbers have been considered random primes as no pattern has been discovered to prove that they are not random.  Well, it turns out that these random primes are not so random – there is a pattern to the sequence of the last digit of prime numbers!  Still with me?  I can’t tell you what the pattern is because it hasn’t been investigated thoroughly to make sure it applies consistently.  We’ll have to wait for that.  Now I am sure some of you are thinking that you learnt the prime numbers in school and they haven’t been much use to you once you left school.  You are wrong – everyone uses prime numbers most days if they do Internet banking, buy something from the Internet or take money out of the cash machine!  How does that work?  Well, all the transactions are encrypted using prime numbers so that hackers can’t interfere with the transactions or gain secure access.  I think that is pretty incredible.👍👏😎

Sorry, so back to the throw, now we all have some idea of the size of this throw – it is not small and will keep Elsie, and probably the new baby too, warm in the winter for many years to come!  I have realised that I must be about a third of my way through my trip as I have done a third of the throw!  I checked it out and my trip is 150 days in total and 50 days was the 12th March so my throw is on schedule!  I also missed two weeks of knitting the throw before the cotton arrived!  I also realised that Castell’s birthday is exactly half way through!  I am really looking forward to seeing him in less than two weeks now! 😀

Elsie came to visit me in my room again today and wanted to watch my iPad so we chilled out on my bed until supper was ready.  Baked potatoe, cheese and beans one of my favourite meals! Yum.  Afterwards we were just wondering when the shopping would arrive when there was a knock at the door!

I spent the evening whatsapping, skyping, knitting and watching some of a film.  Over the last few days I have been in contact with some of the people I used to work with and as I said to them “I miss the banter between colleagues but I don’t miss the job!”  I am looking forward to starting a different career when I get back – I know it won’t pay as much but I think I will be able to make a difference without as much stress!

Quote for today: 🔢 has got to be about Maths……