This morning I was awake as Alice took Elsie to nursery.  When she got back she booked a massage for this morning.  Whilst she was out I washed all the baby stuff that Alice had saved.  I also emptied and cleaned her saucepan and Tupperware cupboard – very hot and sweaty work.  But I like organising things so I was in my element.  When she got back and had had some lunch we put everything she wanted to keep in the organisers and on the one shelf.  Unfortunately, one of the shelves was missing a leg so that had to go back.

After a shower and a bite of lunch myself I decided to take the car to Ballina where I could get shelf replaced and buy another one.  We also needed some blackout material for a door without a curtain so I thought I could get that too.  Replacing the shelf turned into a bit of a fiasco but eventually I walked out with two working shelves.  Kmart didn’t have the baby changing mat either even though it says it has on the Internet.  I asked but they didn’t have any out the back either though five were on order!  Next stop was the Lincraft store I had been to before – I decided that white probably wasn’t Alice’s favourite colour for a tank top so I exchanged it for a lovely deep blue – more about that when I get around to knitting it!  I then had time to try and find a shop called Spotlight similar to The Range but not quite so well organised.  Here is the knitting aisle…. 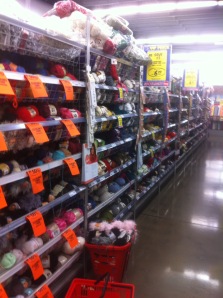 I asked on of the shop assistants if any of the yarn they sold was Australian grown and processed, as I usually do when I go into a shop selling yarn. The answer was no, you won’t get any like that here!  Funnily enough, with my new found knowledge of Australian yarn I did find some  that said “Made in Australia”!  I found a couple of colours that I thought would complement the yarns I had already bought. 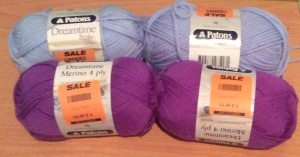 And it was in the sale!  Patons was a brand that I had not come across in Australia as being “Made in Australia” b it that’s what it says on the packet!  I also bought some needles and yarn for me to teach Elsie one day when I have Elsie on my own.  More on that when I give it a go!  Finally, at the till I saw a  bitter lemon drink so I bought that too.  It was lovely and cold and really refreshing.

I got home in time for a supper of salmon, mash and broccoli – yum.  Followed by an evening of tidying, blogging and knitting.