Well, they said it was going to be hot today but it was absolutely sweltering – when I walked outside it was like walking into a hairdryer on full blast!  The only other time I have ever felt wind that hot was in Durban.  I think it reached 34 degrees.

So, with a bottle of water in my bag I set off for Kew cemetery. A couple of tram rides later, the second being quite long, I arrived with the sun still beating down.  I got a map and a more detailed diagram showing the position of the grave I was looking for and set off.  It was not a long walk but it was hot.  I searched in vain for about 20 minutes going from tree to tree to try and keep in the shade.  I then decided that I didn’t want to be searching for over an hour again so I rang the office up and the lady who answered persuaded me to go back to the entrance and go and see her in the office.  She would then explain exactly how to find it.  I asked if I was nearby and I explained I could see a drooping tree of some sort?  I gave in and went back to the office.  The lady greeted me with an offer of a drink of cold water and a cool down in the ,airconditioning which I gratefully accepted.  I explained who I was looking for and showed her the maps I had and she gave me another map which included numbers and names on gravestones.  She also gave me explicit directions to the grave.

After a good cooling down, a topping up of my water bottle and being told to call in on my way out I tried again.  This time I found the grave in 10 minutes and it was under the drooping tree I was looking at earlier!  I hadn’t been too far off.  I sat under this tree for a while drinking my water and contemplating the lives of the four people I knew were buried there.  It was a little sad as there was no gravestone just a numbered metal label in the ground.  This was where the first of my ancestors to come to Australia were buried.

On my way out I stopped at the office to cool off again.  The lady was very helpful and said there probably wasn’t a gravestone even under the debris which had fallen over the years.  I did enquire about the possibility of putting on a memorial plaque but that is something I will discuss with the family.

At the tram stop I realised I had enough time to get to a nearby yarn shop before it closed so I planned what I thought was a slight detour.  The second tram ride was a very long one that took almost half an hour and I thought I wasn’t going to make it.  Fortunately, I made it to The Wool Shop with about 10 minutes to spare.  The owner (I can’t remember her name or find it written down any where) was busy with other customers for a few minutes while I browsed around the shop.  I was listening in on her conversation as she was offering to ship yarn and said she shipped to all sorts of places – I was impressed with the list! 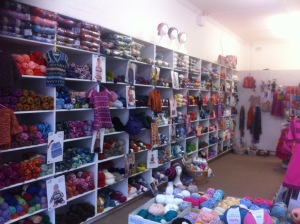 The same story about wool being transported abroad for processing was discussed.  However, I did find some interesting yarn from New Zealand and some solid Heirloom 100% wool that said it was made in Australia.

I didn’t linger long as I knew it was closing time.  Luckily for me the weather had become overcast whilst I was in the shop and the temperature had dropped a little.

An even longer tram ride back into the city was diverted to a different track for repairs so I ended up travelling through Richmond. As I was gazing through the window at life I saw an open shop door with three women knitting at a table.  Without thinking I got up and pulled the bell to stop the tram at the next stop.  Off I got and walked back to the open door.

My eyes had not deceived me it was another wool shop…. 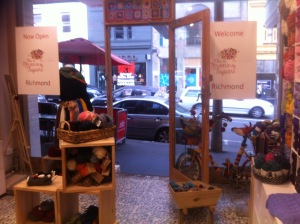 Claire was the lady in charge of  The Granny Square  and I sat down at the table to chat.  She was very helpful and very honest about how yarn is processed for the Australian market.  It was such a nice suprise and a pleasant experience that I just had to buy some yarn.  Unfortunately, it wasn’t Australian but from Uruguay!  Fortunately, it will blend exceedingly well with my other purchases and she only had one skein!

And it smells gorgeous!

Claire kindly gave me simpler directions for getting back to South Yarra and off I went of my final leg of my journey for today.  The cloud had cleared so it was getting warmer again and as it was rush hour a short ride turned into an hour and I got back at gone 7.

As for the rest of the evening – the air-conditioning and the tv went on and I sat down and that was that!

Today’s quote is another picture, which if I hadn’t done in the cemetery The Granny Square would have been closed!